Could Battlefield 6 Become a New Platform for Esports?

Beware, Call of Duty, there’s a new contender on the horizon, and its name is Battlefield 6.

For the last two decades, war has been waged between the two leading first-person shooter franchises. In one corner stands the ever-popular reigning champion, Call of Duty, a mix of traditional multiplayer and frantic battle royale. Its opponent is Battlefield, a slower-paced, more mature franchise that has always found itself playing catch-up.

Since 2002, Battlefield’s focus has been on wide, open battlefields, complete with vehicular combat and huge player counts. Conversely, Call of Duty has always curved towards smaller, high-octane combat, traditionally coming in a ‘boots-on-the-ground’ format. It’s this latter mechanic that has given way to Call of Duty esports rising in popularity for over a decade now.

Battlefield 6: Bringing Back the Franchise

The world hasn’t seen a fresh Battlefield title since 2018, with the launch of the WWII-centric Battlefield V. However, EA has kept the title stoked with periodic updates that have helped the game retain some semblance of freshness. Now, there are leaks and rumours circulating like wildfire that Battlefield 6 will be dropping later this year.

For a few years now, Battlefield has been associated with true-to-life theatres of war. Before the launch of Battlefield V, gamers were treated to 2016’s Battlefield 1, an epic and visceral World War I title. However, throughout history, more Battlefield titles have been modern or near-future than classic or historical.

And, you might be pleased to hear, that fact remains true with Battlefield 6. As the rumours fly, the predominant line is that Battlefield 6 will feature a near-future setting, complete with a fictional, grand-scale war.

here I made them a bit cleaner and sharper. pic.twitter.com/7A1B2LvxAm

Recently, two screenshots allegedly taken from Battlefield 6 surfaced, showing modern material. We’re treated to the inside of a cockpit and a bright, technical HUD – a far cry from the classic WWII UI we’ve gotten used to over the last three years.

There are further notes circulating that suggest Battlefield 6 will feature maps more dynamic than ever before. We’ve heard plenty of talk about day, night, and weather cycles, and deep destruction physics that can quickly turn a vanilla map into a wasteland.

That all sounds incredible, but where will Battlefield 6 fit into the esports industry?

It’s no secret that esports is growing remarkably quickly, with more competitions emerging every day. There’s a staggering amount of money to be made in esports – particularly in esports betting. However, Battlefield has never been a destination for esports, save for a few historic tournaments.

For example, several years ago, the ESL hosted a few competitions on the Battlefield 4 platform. Unfortunately, it never really gained traction, despite being a fully-fledged, casted, and commentated event: 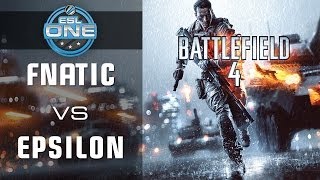 Today, the only esports that exist on the Battlefield platform are amateur-organised competitions with no official backing.

Could that be set to change?

These days, the bulk of EA’s esports branch revolves around FIFA or Apex Legends – neither of which are particularly exhilarating for fans. If Battlefield 6 is going to compete with Call of Duty in the esports industry, it’ll need to pull out some big guns.

There are suggestions circulating that EA has poured resources into making Battlefield 6 a more viable platform for esports. Although, if it’s really going to work, drastic changes need to take place. For example, Battlefield has never been a platform whereupon one can easily host a private, custom game.

If you want to host a private session, you’ll need to purchase server space from EA. If that mechanic is abolished, then Battlefield 6 is one step closer to being an esports platform. Also, developers will need to pay more attention to small-form, close-quarters maps, with game modes that suit the space.

It can certainly happen, but there’s some serious work to be done.

Keep an Eye on the Horizon

Battlefield 6 could be officially announced any day now, especially as E3 is mere weeks away. If EA is playing an intelligent game, it’ll have built Battlefield 6 with esports and competitive gaming in mind.

It’s worth bearing in that mind that Battlefield is made great by its huge, epic clashes between infantry and armoured forces alike. We can’t expect Battlefield 6 to lose sight of that premise, but it’ll be interesting to see how it could be worked into the esports industry.

Let’s wait and see what happens.