When we last wrote about Call of Duty Vanguard, the expectations were an alt-history, post-WWII, fully fictional title. Now, following a full Vanguard reveal, it seems Activision is pushing out another core, WWII-themed adventure. Last night, on the 19th of August, a reveal event was made available in Call of Duty Warzone, but how have fans reacted following that reveal?

Generally, there has been a positive reception to what might be just another WWII shooter. Although the trailer itself was quite impressive, it positively smacked of Battlefield V, the last AAA WWII title to hit the market. As the trailer unravelled, we witnessed a multitude of characters fighting for their lives across every theatre of the Second World War. Here’s the content, just in case you haven’t seen it: 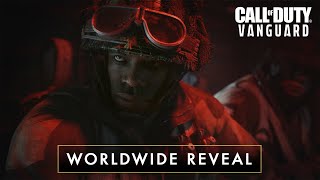 It’s Reveal Time; Where Are We Landing?

For the most part, the Vanguard reveal in Warzone didn’t really have much of a foundation. It saw players ambushing, chasing down, and ultimately decimating a German armoured train, which boasted immeasurable firepower. However, while players were experiencing a mix of modern and outdated combat (hello, Battlefield Portals), they didn’t stop to wonder why they were doing it.

When the event wrapped up and the trailer rolled across our screens, we were still asking questions. The event was good for a few unlocks, but aside from that, there was absolutely no point in doing it. At the tail-end of the five-minute mini-mission, an overwhelming number of German aircraft flew over Verdansk, bombing it into oblivion.

But, it is not known if Verdansk will remain in that condition – shelled beyond all recognition. It could make for an interesting environment, but ultimately, it won’t be a new map.

Which, immediately counteracts what Activision themselves have promised in recent days. Just yesterday, the Call of Duty Twitter page confirmed the impending arrival of a brand new Warzone map and an anti-cheat system exclusively for PC.

So, What’s The Deal With Vanguard?

Sadly, Call of Duty Vanguard isn’t something we’ve never seen before. In the words of developers, Sledgehammer Games, it’s:

… the untold stories of multinational heroes that formed Task Force One, changing the face of history and setting the stage for special forces as we know it.

Battlefield fans will recognise this very line as the basic foundational element behind Battlefield 1 and Battlefield V. In these titles, players assumed the roles of some iconic and unknown characters, most of whom were true to life, or based on real events. The multi-theatre setting isn’t by any means a new one, and once again, players will be experiencing the events of World War II… Like they have, several times over.

If you’re interested in the breakdown of historical coverage, here it is:

It’ll be interesting to see what is delivered in the final product that will launch on November 5th, 2021.