In little over a month, we’ll be waving farewell to Call of Duty Black Ops Cold War. Instead, players will be transitioning en-masse to Call of Duty Vanguard, the latest iteration in the franchise. It would be untrue to call the last year a successful one, as many players are actively welcoming the change in platform. Now, in a final effort to inject life into the dying Cold War environment, COD Season 6 has been announced.

It has been dubbed ‘the final showdown’, an update poised to bring an end to Adler’s Warzone-related story. Furthermore, the COD Season 6 update will be the end of Warzone as we currently know it, with a new map arriving in late November. Throughout the course of the next few weeks, Call of Duty will change irrevocably, but what’s the impact of this final update?

Starting Out On The Final Roadmap

Although we’ll see a similar season and roadmap style in Vanguard, this is the final shot for Cold War. From the moment Vanguard launches, Cold War content will cease to be added into Warzone as, quite frankly, it won’t really exist anymore. It’s a general consensus: fans are extremely eager to leave the Cold War platform. Everything will move to Vanguard, from the content creation to the esports betting.

Firstly, and most importantly, are the tangible, practical items that are coming to COD Season 6 – the weapons. In this final update, players will be granted access to five new weapons, all of which will be available in Warzone and Cold War. There’s the old-fashioned .410 Ironhide, a lever-action shotgun, joined by the GRAV, a Galil-esque assault rifle.

Then, there’s the smaller weapon, the LAPA, an SMG that is sure to become the Season 6 Warzone meta in no time at all. Finally, the offering is capped off with two impressive melee weapons: a Battle-Axe, and a tongue-in-cheek Hammer and Sickle loadout. It’s a fine spread of weapons with something to offer all types of players.

COD Season 6: Back To Basics

As we wave goodbye to the Warzone we know and love, we’re returning to where it all began – the Gulag. For COD Season 6, Warzone players will experience the old-school Gulag one final time, fighting one-on-one in the iconic shower setting. And, the main map is getting back to basics, with a huge explosion tearing through Stadium and Downtown, devasting the environments.

We’ll see skyscrapers fall, roads splinter, and the stadium completely sink into the ground, literally levelling the playing field. And, in true Call of Duty fashion, we’ll see old, original characters come back as operators. In COD Season 6, fans will once again assume control of Mason, an iconic Black Ops character that has existed since 2009.

You can see Mason in action in the COD Season 6 trailer, below: 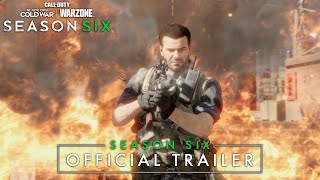 The Last Maps We’ll Ever See

There will be three maps introduced for the final season of Cold War, but will anyone really appreciate them? Firstly, we’ll see Deprogram, a trippy, archaic technological nightmare built for 6v6 combat. Then, there’s Amerika, a map built around the combat simulation environment experienced in Cold War’s rather impressive story-mode. Finally, fans of the 2v2 and 3v3 modes will receive Gluboko, a miniscule map built for high-octane experiences.

Ultimately, this should be an update to enjoy, as it’s the swan song for Black Ops Cold War. Once the COD Season 6 content has dropped in full, Cold War will rapidly become a thing of the past. And, despite it being one of the most rushed, and lowest rated Call of Duty titles in recent history, we did have one hell of a year playing it and watching the Call of Duty League.

Here’s to Cold War – may you enjoy the Final Showdown.