New battles and bosses in Swords of Gargantua

VR game, Swords of Gargantua has launched a huge new update. According to the announcement from the developers, this major addition to the game is absolutely free and will be included in the next free update to the title.

Swords of Gargantua is a single and multiplayer VR sword game. It closely follows the rogue-like mould of Hades, Enter the Gungeon, or Dead Cells. You try to fight your way through 101 floors of enemies to defeat the final boss. Every time you die, you restart at the beginning of the game. The hook that brings you back is a constant trickle of persistent upgrades that make you feel incrementally more powerful.

This sort of game is perfect for VR headsets. It gives you the power fantasy of wielding weapons like one and two-handed swords, axes, maces, boomerangs, shields, and more, but it doesn’t make the game too easy. I always find that easy VR titles become boring far quicker than difficult ones. It is easy to make a VR title feel like a toy rather than a game but Swords of Gargantua manages to walk that tightrope. 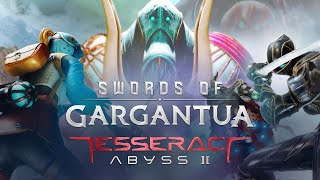 The newest update to Swords of Gargantua is called Tesseract Abyss 2. Thirdverse, the developers of the game, have said that it will include three new enemies, more challenging battles, and increased focus on strategy. This sort of thing is hugely important, especially for VR action titles. I know I certainly get tired of waving my arms around like a madman to beat a level. A bit of strategy and focus on the gameplay really improves any VR title.

The newest update is a follow-up to a previous expansion back in 2019. It was titled Tesseract Abyss Adventure Mode expansion and it put players into the deepest layers of the 4D space known as the “Tesseract”. By using weapons and coins earned by playing this mode, players can continue into the abyss, gradually becoming stronger through equipment and abilities. This rogue-like mode has been expanded with new enemies, new weapons, and new challenges. “Since the release of the first Tesseract Abyss in 2019, we’ve had many requests from fans to expand our adventure mode with new challenging battles, and we’re pleased to do that now. We’re excited to see the response to Tesseract Abyss 2 as more players are introduced to SWORDS of GARGANTUA this year.”

How to play the update

You can play Swords of Gargantua and the new update on the Oculus Rift, Oculus Quest, HTC Vive, HTC VIVE COSMOS, Valve Index, and Windows Mixed Reality devices. The game is also available on the PSVR, but it doesn’t look like the new update has been ported to that system. They may be waiting for the new PlayStation VR headset, or it may just be their least popular version of the game.

If you are interested in checking out Swords of Gargantua and Tesseract Abyss 2, it is now available with the purchase of full game for $24.99 USD from Steam, Oculus, and VIVEPORT Stores.