If you have played DOTA 2 recently, you will have noticed that one of the most used chat wheel lines in the game is Lakad Matatag, Normalin Normalin. This is spammed and sent hundreds of times. But what is the meaning of lakad matatag?

If you just want the basic lakad matatag meaning, all you need to know is the root language of the phrase. The phrase comes from the Filipino language, Tagalog. To translate the phrase, it breaks down to “Walk strong and deliver a normal attack.”

Looking at it without any context, this doesn’t seem like a very interesting or catchy line. So how did such a basic phrase become such an iconic meme and chat line in the DOTA 2 community? 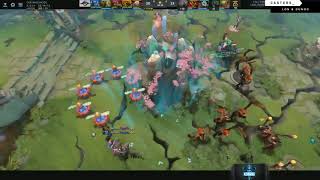 The origin of the phrase

If you give the phrase a little more context, it all starts to become clear. The phrase has been around as a chat line for a while, but it was popularised back in 2018 by a pair of Filipino commentators, Marlon “Lon” Marcelo and Aldrin “Kuya D” Pangan, when they were casting a game of ESL One Katowice 2018.

It was a match between Fnatic and Team Secret. In the game, EternaLEnVy’s Razor for Fnatic had sucked the damage using Static Link from Secret Ace’s Lone Druid in a tactically important part of the game.  This helped Fantic take home the win against Team Secret who were already very far ahead in points.

The phrase Lakad Matatag, Normalin Normalin described the way that Fnatic came from behind and won the game. It became a meme because of how excited and invested the two casters were in the outcome of the game. The enthusiasm these two casters had, cemented the chat line in the collective DOTA 2 community. Since then, it has become a go-to chat line when players want to express support and boost the morale of their teammates. If they are far behind, Lakad Matatag, Normalin Normalin is a push to keep them going.

Popularity in the Philippines

While the chat line is hugely popular in the DOTA 2 community, it has not made its way into the general gaming culture. There are still far more popular memes that have come and gone. Not so in the Philippines.

It may be the biggest gaming meme to come out of the country and it has definitely struck a chord with the huge DOTA 2 fanbase in the country. Outside of mobile gaming options, DOTA 2 is the biggest video game in the Philippines. There are thousands of active players and if you looked at the list of the biggest esports stars in the Philippines, only one of them is not a DOTA 2 player. Even then, Jake “Xmithie” Puchero, still plays League of Legends, another MOBA.

The fanbase is huge and the enthusiasm that you can see first-hand from the casters is equalled by the fanbase. It isn’t surprising that DOTA 2 and by extension, DOTA 2 betting is a hugely popular pastime.